At their most fundamental level, connectors are data manipulation tools, so the data that flows in and out of them is crucial to make a connector useful. Inputs are the data pieces that come from an external source (other methods, connectors, or functions) and are used throughout your connector. Outputs are the data pieces that are sent out from your connector, and are able to be used throughout your Flow.

Inputs and outputs functionally work almost exactly the same. They are declared exactly the same, can be all the same types, and take almost all of the same modifiers. The main difference however, is that outputs are often rendered in a slightly different way inside of a Flow, to optimize for the operations you’ll want to perform on data coming out of a connector. So, for the majority of the Inputs & Outputs section, inputs and outputs will be treated interchangeably.

Inside of a connector, inputs and outputs always start with “headers” (or group names) at the top level, and fields inside of those headed subsections. As you can see with this example, our inputs are grouped into two sections with headings: 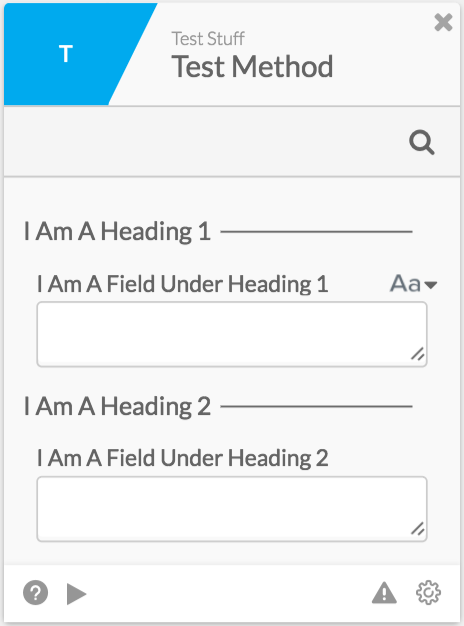 To define this, we would declare our inputs in the “input” section of a connector method, like so (Note: defining outputs would be the same, except we’d be defining them in the “output” section):

You can see the outlines of our groups here as you would expect, but let’s dive into what each specific field means:

After all of this, our connector would have statically-defined inputs surfaced to the user. This means that any value that the user puts in could now be referenced inside of our connector method using ”{{input.headingName.fieldName}}“.